skip to main | skip to sidebar

This Year, April Really Is The Cruelest Month

Yeah, I'm a little out of my groove this month. I've been really tired for some reason, and having a hard time focusing on anything that isn't work/kids/sleep.

That, more than anything, is the reason for my not posting a Sundries last weekend. It's like the old Bloom County strip about the media trying to cope with a day when literally nothing happens. ("Nothing: Is it the new something?") It's possible. But it's embarrassing.

I've been writing on my lunch hour, even on the subway (I normally find public transit way too crowded and stressful to write, but you gotta use the time you've got, right?) So it is happening, albeit at a pace that frustrates me.

Part of the problem with this incremental approach is that the characters are still pretty new to me, so it can sometimes take a while for me to find their voices. And then I have to stop and go back to work.

I'd love to have a day, even an afternoon, to go heads-down and finish the chapter -- maybe May will be more conducive?

The Writers Group and the Screenplay

My Writers Group met last week, and another piece of my screenplay was up for discussion.

Hmm. Have I talked about the screenplay recently? I back-burnered the postmodern-y, genre-bending romantic comedy I originally brought to the group, and instead I've been offering pieces from the thriller I started, and blogged about, a couple of years ago.

It's about time for me to incorporate some of the great feedback I've been getting and write a new draft. One which, uh, actually finishes the script, which kind of ran out of gas at the Act 2/Act 3 transition and has been languishing ever since.

It's called Dark Green, by the way.

The weather in Toronto is supposed to get back to seasonal norms starting tomorrow -- rainy, and in the mid-single-digit Celsius range -- from the June-like temperatures we've been enjoying.

For all that, I think it might be a better week for me. I took a real kick at my sleep deficit today, and I'm feeling excited about both Cold Iron Badge and Dark Green. I'll keep you posted, of course.
Posted by Unknown at 5:23 PM No comments:

I Should Just Call it the 'Weekly Update' or Something...

Welcome to another lazy Sunday -- so lazy, it lasted through most of Monday!

Script Happens
Posting the latest Cold Iron Badge preview has been another kick in the motivator, and I've been moving forward with the script for Chapter 3. I'm at the stage where I need to get the stuff I've been writing in my notebook on my lunch break out of my notebook and into the computer, and carving out the time to do that has been another challenge.

You Can Get Pigtails & Potbellies Online?
My old friend Mike White returns to comics after several years away from the game with his new web strip, Pigtails & Potbellies. It's about a pig, a little girl who doesn't talk much, and a guy who makes Steve Dallas look like Steven Hawking.

Seeing new comics from Mike is just pure, unremitting joy -- every panel is so full of energy and fun! I can't recommend his work enough, so I'll just ask you this: Do you want to be happier?

Dreams Can Come True... Especially Weird Ones
Some of you will remember, back in January, when I posted It Turns Out I Have a Secret History -- about discovering that my great-grandfather, Victor Lauriston, had written short stories for the old pulp magazines. Including, to my shock and delight, for the great-grandfather of modern fantasy and horror fiction, Weird Tales. H. P. Lovecraft was featured in the same issue.

Through a fortuitous bit of web alchemy, Steven H. Segal, the editorial and creative director of Weird Tales -- yes, it's still going strong -- saw that post, and asked if I'd be interested in telling my story in the 85th Anniversary issue of Weird Tales.

To say that I was, yes, definitely interested would be to understate the case by several orders of magnitude. It's fair to say that email was the most exciting thing that happened to me in January -- and I got my new job that month.

So: My piece appears in the current issue of Weird Tales, the 85th Anniversary issue, #349. It's available in stores, or directly from the publisher.

To say that this is a dream come true is not hyperbole, but a simple statement of fact. A weird dream, to be sure. But my dream.

And, just to give great-grandfather a run for his money? Also featured in this issue are luminaries like Ken Hite, Tanith Lee...

I doubt I'll be able to top this one, but I'll have more updates next week, plus any one-off rants that time permits in between.
Posted by Unknown at 11:07 PM No comments:

Pages 4 - 7 of Cold Iron Badge. This scene introduces our protagonist, by the way. (Click images to enlarge.) 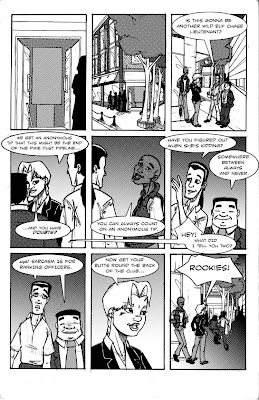 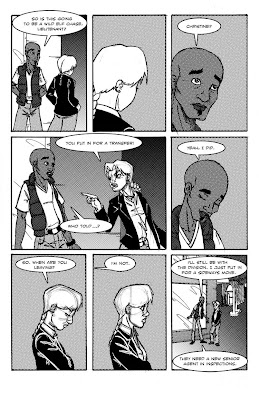 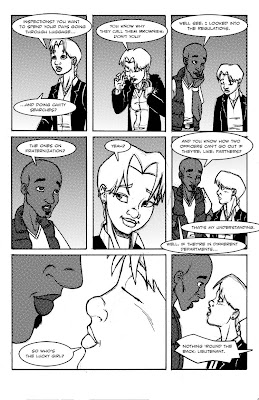 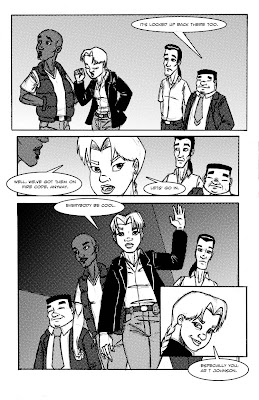 By Stephen Geigen-Miller and Patrick Heinicke

The Adventures of Sunday Sundries Across the 8th Dimension

I'm once again invoking artistic license, and proceeding with numbering these updates as though there had been a 'Sunday Sundries VII' last week. Mostly because the Buckaroo Banzai reference was too much fun to wait another week for.

I skipped the update because, well, not a whole lot of note had been happening. I spent a lot of last weekend too tired to do much besides stare at the walls, after having coordinated moving the office to a new space that Friday.

No, I didn't have to do the actually lifting and carrying -- and thank goodness -- but the stress of being responsible for the whole deal wore me right out. Keep in mind, I've had my job for less than two months, and I was single-handedly dealing with organizing the whole move. Exciting, I learned a lot and the new location is great. But it was tiring.

But that was last weekend.

Yes, I've been writing, and man does it ever feel good. I realized that it wasn't that I don't have any time -- it's that the time I do have wasn't allowing me to write in the way I was used to.

So the solution was a change of approach.

I've been writing on my lunch hour -- the new space is on the third floor of an office building, and there's a small cafe on the main floor. If I take a late lunch, it's pretty quiet and there's lots of space.

I wasn't sure what kind of results I'd get, having just under a hour to write. But it seems to be working out so far, as does the other big change -- writing longhand.

Yeah. Longhand. My laptop is old, clunky and has a lousy battery, so it would be a pain to drag along on my morning commute, and a bigger pain to try to use in the cafe.

But my notebook and a pen? Hella portable.

What have I been working on, this past week of lunch hours? I've been doing a bit of editing on a friend's project, but mostly I've been getting back to Cold Iron Badge. And I finally, finally seem to be getting some traction on my script for Chapter 3.

In more exciting news, Patrick has finished pencilling Chapter 1 -- congratulations! -- with a hefty chunk of those pages also inked and lettered. Which means that we'll have another preview for you shortly!

There's a lot more to talk about -- especially the big online discussion that's developed over the past couple of weeks regarding the economics of webcomics, but that's a big enough topic to warrant a post of its own.

I'll try to marshal my thoughts on that sometime this week. Assuming that I don't have to move any more offices, that is!
Posted by Unknown at 3:39 PM 1 comment:

For Writers By Writers